Skip to main content
Back to Top
Charles H. Hood Foundation | Guoping Feng, Ph.D. – 2018
By identifying innovative pediatric advancements and providing funding in the critical phases of development, we are able to expedite high-impact breakthroughs that improve the health and lives of millions.
17112
portfolio_page-template-default,single,single-portfolio_page,postid-17112,ajax_fade,page_not_loaded,,qode-title-hidden,qode-child-theme-ver-1.0.0,qode-theme-ver-10.0,wpb-js-composer js-comp-ver-4.12,vc_responsive 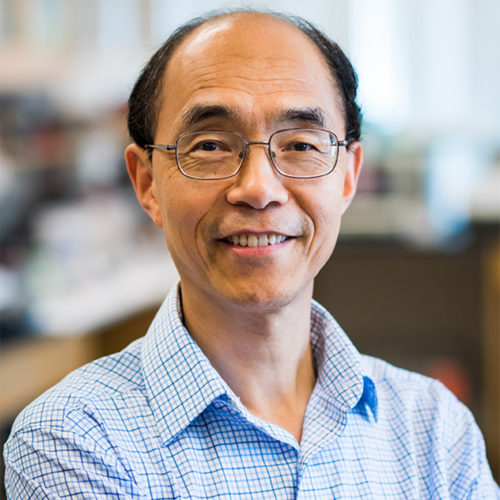 Neurodevelopmental disorders such as autism spectrum disorders (ASD) and intellectual disability are some of the most debilitating brain disorders and we currently have no effective treatment for them. Although the genetic factors underlying these disorders are complex, many rare single-gene mutations have been causatively linked to severe ASD and intellectual disability (monogenic disorders). Because most genes have multiple functions in different brain regions and during different developmental stages, developing effective pharmacological treatments for these disorders has proven daunting. The most effective treatment may come from correcting the genetic defect itself through gene therapy. For most monogenic disorders, only one of the two copies of the gene is disrupted and thus upregulation of the expression of the normal copy to compensate for the loss of the disrupted copy is a promising approach for gene therapy. We aim to develop and test two different drug-inducible CRISPR/dCas9-transcription activator (CRISPR/dCas9-TA) approaches for precise control of the Shank3 gene activation. Shank3 is a postsynaptic scaffolding protein critical for the development and function of synapses. Heterozygous deletions and mutations of the Shank3 gene in humans lead to severe neurodevelopmental disorder and ASD. In the first approach, we will develop a system that uses a drug to stabilize the Cas9-transcription activator for precise control of Shank3 gene expression. In the second approach, we will develop a drug-induced dimerization of the split Cas9 system to control Cas9-transcription activator activity on Shank3 expression. We will use Shank3 heterozygous mutant mice (Shank3+/-) as our ASD model to test the system. Initially, we will test and calibrate the system in cultured Shank3+/- neurons. After we achieve precise control of gene activation in cultured neurons, we will then test the system in Shank3+/- mice using a blood-brain barrier-penetrating AAV virus to systemically deliver the CRISPR/Cas9-transcription activator system to the brain. In addition to testing the precise control of Shank3 expression in these mice, we will also test whether the system can reverse synaptic and behavioral defects in Shank3+/- mice. If successful, this could be a viable approach to be developed into gene therapy in humans in the future. Importantly, this system can be easily applied to many other neurodevelopmental disorders by simply changing the CRISPR guide RNA sequences to match the gene of interest.